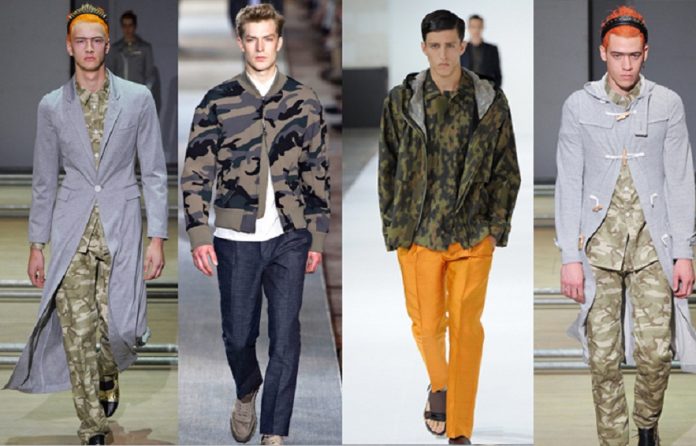 We present a news of the world of fashion : camouflage returns in men’s fashion . Learn a little about the history of military style , in addition, how to combine it to catch looks. Enjoy the article below.

A little history about the military style

Every once in a while, styles that set the tone return, fashion historians say that every 15 or 20 years, a fashion resurfaces. Just in the year 2000 many men went crazy with a very peculiar tendency: pants, shirts and jackets with camouflage or military print.

The origin of this dress is right between the end of the 40s, some gentlemen had to wear this style by mere necessity, because they were part of the battle squads, of the countries that were at war.

When World War II ended, men wore their campaign uniforms for day to day. Women did too. The detail is that they had nothing more to wear, nor money to invest in other garments.

What was born as a necessity, became a fashion. Some time later, just in the 70s, with the appearance of hippies, the military print began to make timid appearances. At that time the garments were not used as such, but pieces of cloth that were placed patch style on pants and jackets.

His return to fashion

It would be at the beginning of the year 2000 when military prints make their formal appearance in the world of fashion. Men and women wore large jackets that combined with basic white shirts, rarely black.

They also wore jeans with these prints that combined with white sneakers or big boots. It was the trend of the moment. The most daring went a little further and made combinations with leather or leather, so that the print was the protagonist.

The best of the style that was born formally at the beginning of the year 2000, was the versatility of the garments . Thanks to the jackets, there was no concern for the cold and in the large pockets, they could store whatever you liked.

And although fashion was somewhat masculine, some women simply adapted to their figures to be in vogue.

Camouflage is back in men’s fashion with these garments

Today, designers tend to be more inclusive in the garments they make for the general public. Sample of this, is the fashion of the 90 that was reinterpreted recently. In addition, they try to make everything as versatile as possible because men need to do everything and have almost no time for anything.

The current man demands clothes that he can wear in several facets, on the same day. Of course, everything has a limit. Although there are several garments with this print, it is not that you will wear them all at the same time, you must combine them with basic elements to enhance the camouflage.

The colors that characterize this fashion are: metallic gray, dark green and earth tones. Not everything is stamped. In addition to our website, department stores have several proposals that are ideal for this season.

Military jacket plus suit Do you dare?

In this winter season, gentlemen will find it difficult to make certain combinations, especially because of the little functionality that some pieces tend to be for certain occasions.

Jackets jackets military style usually an excellent bet that highlight your joviality and keep your body at an optimum temperature. One option would be to combine the military green of the jacket with dark beige tones of a suit and a blue shirt. With this you will break the seriousness of the suit, but at the same time you will project style and a lot of elegance .

They are making appearances in several showcases of the big brands. They are characterized by good skin and very hot, ideal for winter. There are several options that you can combine according to your style .

One of the models is with black leather – the military boot itself. Its height reaches half the calf. There are others that emphasize color, which is a light or dark brown.

In general, it is usually risky to wear them, but with enough style, you can achieve a solid look. With which you can project a lot of masculinity and all the girls fall round at your feet.

A good man will always give a projection to a man. In addition to shoes, women always see the watch worn by the gentleman. As with any piece of clothing, accessories should be taken care of and worn in style.

There are several brands houses that have taken advantage of the triumphant return of military prints to get limited editions of watches and purses . Watches with this style are usually sober. They are doing well to all those who are lovers of vintage aesthetics.

Not everyone has the military print itself. There are colors inherent to this style, some are olive green and others black.

Although it is a print that is usually worn by the younger audience, everyone usually looks good with one or another piece, remember, without falling into excess. When wearing a military garment you can project the following:

Do not be the last to add these pieces to your dress because camouflage returns in men’s fashion. What do you think of these recommendations about the military style? Remember to share these tips on your social networks.

Male fashion: How to wear white pants without losing dignity

The best beard styles according to the shape of your face