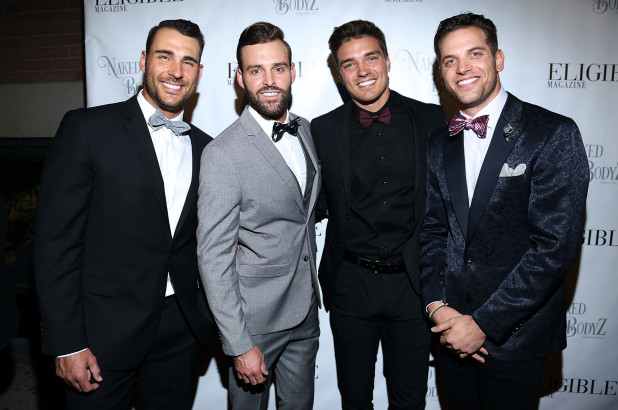 What defines a man with style? The menswear portal left behind the celebrations for Halloween to concentrate on developing the following list of celebrities that shined in October for their splendid way of dressing.

Mark Ronson For most men, wearing a light-colored suit like this would be a challenge in and of itself, even before considering the somewhat retro-cut wide cut of the trousers. But Mark Ronson is a piece of cake. In fact, he is so relaxed about it that he has put on a boat neck shirt instead of a shirt. And because of his “why not” attitude, it works for him. You can not be too stiff by opting for a loose Bohemian cut like this.

Pharrell Williams Sometimes, it seems that Pharrell Williams only used counterintuitive things to show that he can put them in fashion; This double denim set is a good example. But there is actually a bit more in this outfit than that – it’s a success because both the jeans and the jacket are intricately faded, which means they are not very combinable, even though they are a similar color . The faded look (with a white T-shirt) also reminds us a bit of Martin Sheen in Terrence Malick’s 1973 masterpiece, Badlands, something very, very good.

Raf Simons Is Raf Simons giving fashion trends to an impressed pupil on the other side of the line? Or will you be listening to a message with a drunken and alarming voice? Of course, we have no way of knowing. But we do know that he is responding to this call with style, thanks to his minimal color palette of black, blue and beige and his somewhat aged Stan Smiths. He was largely responsible for repopularizing classic tennis shoes last year, and is now using them to undermine the classic of his raincoat. They do not call it genius for nothing.

Ralph Fiennes Ralph Fiennes has worn various tuxedos throughout his life, looking extremely comfortable here in this classic lapel peak suit at the premiere of the new Bond film, Specter. A good aspect of the outfit is that he has had the confidence not to exaggerate. With the tight basta pants just above the shoe, a bow tie and a jacket that reveals half an inch from the sleeve of the white shirt, there is not much to improve. No wonder he has that big smile on his face.

Stefano Tonchi Stefano Tonchi, editor in chief of W Magazine, is one of the few men in the world who can make the look of Wall Street (gray suit, beige coat, black Oxford shoes) look at the forefront, and here he does it with a lot of aplomb. The secret of everything is in the long and thin cut of the double-breasted jacket, which makes it an outfit that is at the same time more flattering and more informal than the typical city uniform. Of course, it helps that you are grabbing an invitation – always a good way to look as if you are going somewhere wonderful and important.

Jarvis Cocker We are not sure if the musician and DJ Jarvis Cocker, a more singular and pioneering individual, is the kind of person to look for when Mr. Porter says things like “the 1970s are back”. But here is Jarvis anyway, proving this proposition in a panoply of pieces of brown velvet. This attire can be a bit intense for your average music star, but it shows how you can get the most out of the-sometimes difficult-brown color by using several different tones of it at once. Thanks to this sartorial trick, here Cocker escapes from looking like a dusty librarian and instead looks what he is-a libertine city man.

Daniel Craig If you have managed to go to the movies this month to see the high-speed fashion show that is Specter, you might think you’ve seen Daniel Craig put on as many costumes as he has for the rest of his life. But, be patient with us, because there is one more here that is worth observing. Here, Mr. Craig is not demonstrating how to pack 18 linen suits, numerous pieces of ski suits, boots and a cream tuxedo into two small pieces of carry-on luggage (although we would like to see the Specter writers let us know this secret) but how a man in his 40s can look younger with an elegant leather jacket by Oliver Spencer. It is a great informal outfit, neither too elegant, nor too careless, and it looks particularly cool due to the palette of black and white colors with indigo tones.

Brendan Fallis You arrive at the party, find the place where your name is written on the wall. He stands there, so that everyone knows who you are. People take pictures Ah, if life were always that simple! Unfortunately, these types of benefits are only available to people like DJ and entrepreneur Brendan Fallis, who appears here (apparently at his designated place), attending a Spring Studios event during New York fashion week. As is his custom in such occasions, he has combined an attractive casual-elegant look with a sporty touch, entering the trend of gray over gray next season with his impeccable combination of sweater and jacket, and with a new pair of sneakers for the finishing touch

10 things that should be in your basic wardrobe

How to Choose Sunglasses

How to choose the perfect sunglasses